Hooray–for who wouldn’t want to sit around the table and pick over a heap of artichokes? Well, probably a lot of people. It’s been my experience that when it comes to this prickly thistle there are two camps: love them or hate them. If you hate them, there are only two possible reasons. One, they are a challenge to prepare and two, there simply isn’t much to eat on an artichoke. True; I’ve known many a person who utilizes an artichoke leaf as a vehicle for a dipping sauce, and it’s even more true that there is just a little bit of ‘meat’ for one’s teeth to scrape away on each leaf, but eating a pile of artichokes is as fun, rewarding, and delicious as spending an afternoon picking crabs. Not to mention, once you pick your way through all of the leaves, you get the real prize–the heart. So, it’s fairly safe to say that if you can’t fathom a better way to spend the day, then you come down in the other camp–a bona fide artichoke lover!

That’s me. So, when Mr. B came home the other night with a lumpy brown paper bag sticking out of his satchel and a Cheshire grin on his face and announced he had a surprise for me, I knew that the Artichoke Man must have stopped by his office. When I opened the bag and peered in to see seven beautiful medium-size artichokes, I was thrilled. Not only would I get to eat artichokes, but it also meant that Spring was on its way and soon enough, all the delights of the new season would be bountiful and ready to enjoy.

Before I espouse on how to cook, or even eat, an artichoke, perhaps a bit of artichoke trivia to brighten the day. First off, the artichoke is truly a Mediterranean discovery. First discovered in Sicily, the ancient Romans candied the hearts with honey and cumin seed. I find this fascinating since the person who ventured eating an artichoke surely had a lot to learn. It must have been hell to figure that one out and I imagine one’s mouth would have been torn to pieces by the sharp leaves and prickly tips, not to mention the fuzzy chokes, especially since early artichoke eaters were going at the task with raw artichokes.
Anyhow, discover a better way to eat them, they did, and the artichoke moved around Europe gaining popularity, eventually riding the seas to Louisiana with the French and then soon after, taken by the Spanish to California. Now, virtually every artichoke eaten in the United States originates from Monterrey County, which just so happens to be about 90 minutes up the road from me. About 80% of all artichokes are grown in a little town called Castroville, which is located in Monterrey County. Finally, just to note, in 1947, Marilyn Monroe was crowned the Queen of Artichokes in Castroville, which is a bit ironic since at one point the artichoke was also considered an aphrodisiac.
During the years that I lived in Louisiana, the artichoke and I were fast friends. Possibly, the most common preparation of the artichoke in Louisiana is stuffed, or, shall I say, overstuffed, with bread crumbs and parmesan cheese and garlic, then drenched in olive oil and baked. At times, this recipe varies; sometimes one can find it with shrimp or crab stuffing, but aside from these two deviations, I am fairly unable to recall any other artichoke recipes. Wait! I take that back; I’ve known many a family to throw a big bag into a boiling crawfish pot along with the crawfish and other delicacies.
It’s really no surprise that moving to California opened me up to a whole new world of artichoke preparation. Perhaps one of the most remarkable discoveries, and one only available within a short radius of the artichoke farm is the baby artichoke. Only as big as a walnut, the whole thing is edible; they are delectable shaved into a vibrant pale green mound, drizzled with good olive oil and a squeeze of Myer lemon, a slight sprinkling of sea salt and a few grinds of pepper. They are also marvelous baked in a bit of olive oil with slivered garlic and piled onto slices of toasted sourdough bread and should there be any leftovers from this last preparation, they are amazing stuffed between thick slices of bread along with Fontina cheese and grilled until golden brown.
The restaurants in San Francisco brought an array of pickled and marinated artichokes into my life and many Italian restaurants served up delicious plates of Fritto Misto, or bits of artichoke and seafood (usually calamari), dipped in batter and fried in olive oil.
When we moved south, just outside of Los Angeles, artichokes disappeared from our regular menu, but once we moved north and settled into life along the Central Coast, they reappeared as rustic as the geography. A favorite preparation of this area is grilled over an open fire with lots of garlic and lemon.
While all of these recipes are quite delicious and reflect ones that I’ve made in my own kitchen during my years in the Golden State, I love the simple preparation (possibly a grossly negligent statement in apiece about artichokes) of oven roasting the thistles with olive oil and garlic and then packing a bit of parmesan cheese into the center cavity and baking until the cheese is bubbly and brown. 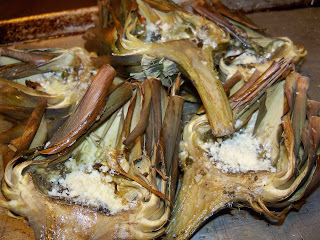 Roasted Artichokes
Pull away the first ring or two of thick leaves closest to the stem and discard. With sharp kitchen scissors, cut away the sharp tips of the leaves, digging a bit into the artichoke for the ‘hidden’ leaves at the top. Place the prepared artichokes on a kitchen towel and with a sharp knife, cut the top inch of the artichoke off and then cut the artichoke in half lengthwise. Working quickly, place the artichokes on a plate in a single layer and squeeze lemon juice over the artichokes; rub the lemon over the cut surface. Add a bit of water and cover with plastic wrap. Microwave on high for 6 to 8 minutes, or until a leaf easily pulls off the artichoke. Drain the liquid and transfer the artichokes to a baking dish.  Remove the inner choke (the fuzzy stuff just above the heart) with a melon baller, careful not to cut away any of the heart. Drizzle with olive oil and sprinkle with minced garlic. Bake at 425º for 10 minutes; sprinkle the centers with parmesan cheese and return to the oven baking just until the cheese melts and begins to brown.