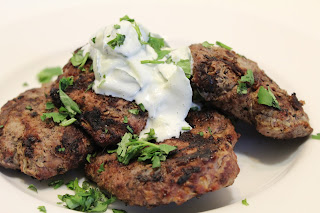 A few weeks ago, Mr. B told me that old friends of ours were passing through town. It had been over 4 years since I’d last seen them or heard from them, and I’m guessing from Mr. B’s initial reaction of pleasure and surprise, that it had been that long for him as well.

While it may seem unusual that friends would allow so many years to pass by without so much as a word, it certainly didn’t stop me from planning a delicious late summer afternoon lunch to serve poolside.

Besides being an especially warm day, it also happened that they were passing through at the end of a weekend trip in honor of their 10th anniversary. It was enough for me to pick flowers and pull out a table cloth, to set the table under the umbrella, to artfully arrange a platter of tomatoes, and to buy imported water in the dark blue glass bottles I like so much.

I decided to go Cali-Persian with my menu, but truthfully, by the time I left the kitchen, I think I had a few other cultures thrown in the mix. While Mr. B fired up the grill for my Middle Eastern inspired lamb and beef patties, we chatted it up over a platter of hummus and salty chunks of imported feta.

All in all, it was a fabulous afternoon and I sent them on their way with a jar of homemade harissa and a bar of good imported chocolate.

1. Place onion in two layers of paper towels and squeeze to remove the juice.
2. Place onion in  large bowl and mix in meats and seasonings.
3. Shape into patties and refrigerated for 2 hours.
4. Heat grill; grill patties until just cooked through.
5. Top with chopped mint, cilantro, parsley and tzatziki.
6. Serve with grilled pita breads and harissa.