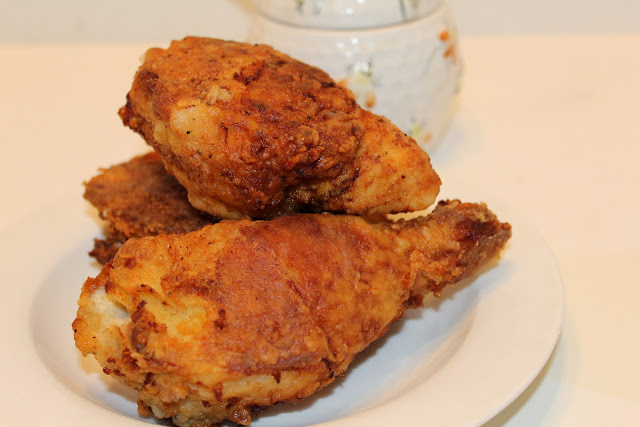 Once again Mr. B proved to be my hero and after far too long, he figured out the riddle of the broken oven. So, one day while I was out, he took the stove apart and finally, fixed it. It was just the sort of romantic gesture that made me swoon in delight and reciprocate the love with a plate of fried chicken.

Most people know about Mr. B’s deep fondness for fried chicken, but few know that I have more than a passing fancy with the dish myself. Truth is, I love fried chicken almost as much as I love Mr. B.

Everyone has a favorite food. One which they may only crave occasionally, but when they do, the craving is so fierce and undeterred that it turns them from a rational and thinking being into a single-minded and irrational soul. The realization that food could could create such determined passion came to me at an early age when I discovered my unwavering love of fried chicken.
I’m not sure how I developed my fondness for fried chicken, but I’m sure it had something to do with the fact that we lived just up the street from a fried chicken restaurant. The entirety of their menu was comprised of baskets of fried chicken and steaming bowls of mashed potatoes served alongside pitchers of gravy. While I had a soft spot for the potatoes, it was the golden, crispy pieces of chicken that won my heart. We only ate there once, but I remember it in vivid detail from the red gingham napkins and sky blue Pyrex™ bowls heaped with potatoes, to the overly large plastic rooster that stood watch next to the cash register.
In the summer when it was warm enough to open the windows, I would drift off to sleep as the smell of fried chicken came wafting through the house on the evening breeze. It’s not surprising, then, that the whole of my small being became obsessed with eating fried chicken, and while my mother wasn’t the sort to fry food, it didn’t stop me from relentlessly hounding her to change her ways.
At some point, my grandmother learned about my single-minded fried chicken obsession and like any good grandmother was only too happy to indulge me. My grandmother, however, was Romanian and she fried chicken the Romanian way, which I soon discovered was not to my liking. Once cooked, the chicken pieces were hidden beneath a thick crepe-like exterior that tasted strongly of fried onions and bay leaf. Making matters worse, for my grandmother, frying chicken was an act of love and even though I could be a willful and disobedient child and possessed a marked mean streak, I didn’t have the heart to tell her how much I disliked her fried chicken.
Life went on and I ate good fried chicken as often as I could, but of course, it was never as often as I would have liked. Finally, when I was old enough to have my own apartment and lord over my own kitchen and could eat as much fried chicken as my heart desired, I learned a startling and shocking truth–frying chicken was a messy and time consuming affair. Thus, I would go months and months without frying chicken.
One day, when someone dear to me asked if I wouldn’t get out the frying pan and fry up some chicken, I heard myself reply that it was far too much work and would best be saved for a special occasion. Not only was I shocked by my grown up sensibilities, but I was startled to think that I had become the sort of woman who put off the best of life’s little pleasures for some distant day in the future.
That was the moment when I decided to live on the edge and fry more chicken. In retrospect, it really isn’t nearly the work that I thought it was and as for messy, well that had more to do with me than the chicken.
Never one to settle on the ‘perfect’ fried chicken recipe, I’m always willing to experiment with another method. This time around, I exchanged all purpose flour for bread flour and brined the chicken in whole milk, heavy cream, and hot sauce. The result–extra crispy, tender, juicy pieces that were so good that Mr. B and I almost went to fisticuffs over the last piece.

1 whole fryer, cleaned and cut into pieces
1 quart of whole milk
1 pint of heavy cream
2 tablespoons of salt
4 tablespoons of sugar
2-3 tablespoons of hot sauce
bread flour
cayenne pepper
salt
pepper
oil for frying
1. Heat milk to a simmer and add salt, sugar and hot sauce; remove from heat and let cool.
2. Add cold heavy cream; stir.
3. Add chicken pieces and refrigerate for 24 hours, or at least, overnight.
When ready to fry:
1. Drain chicken in a colander in the sink.
2. Add 4 cups of bread flour, a teaspoon of salt and lots and lots of black pepper and a healthy pinch of cayenne pepper into a brown paper grocery bag and shake to evenly distribute the seasonings.
3. Working with one piece at a time, drop the chicken pieces into the bag and shake to coat with the seasoned flour; remove and set on a rack, continuing until all pieces are coated.
4. Fry the chicken in a cast iron pan until crispy, turning once. Don’t crowd the chicken–it will be necessary to fry in two batches.
5. Drain on paper towels; serve hot with honey.