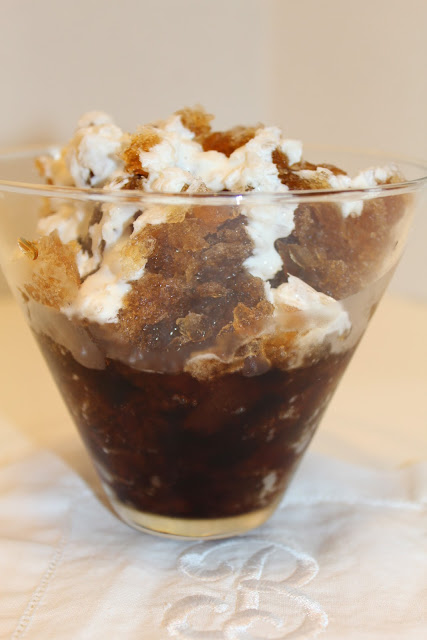 One of the things I miss the most about summer in New Orleans–and only someone who had never lived there wouldn’t question that there was anything to miss about New Orleans in the summer–is being so hot and sweaty that the only thing that mattered was a trip to the nearest Sno Ball stand.

The beauty of the Sno ball is that it only existed during summertime when all around the city, tiny little shops that were boarded up the remainder of the year, suddenly sprang to life. Almost magically, people would appear and long lines would snake around the block in the oppressively muggy evenings.

Depending on what Sno ball stand I happened to be at was the sole determining factor in my favorite flavor–usually, grape or cherry, but sometimes, I’d chance upon a coffee Sno ball, drenched in thick condensed cream that was like coffee ice cream, but far more refreshing.

We’re a long way from the nearest Sno ball stand and while I wouldn’t even know where to begin in recreating that soft shaved ice, I like to relive those long ago memories by indulging in an iced coffee–a sort of granita–that’s far removed from a Sno ball, but none-the-less, pretty damn good. Admittedly, however, this is not very sweet, since I opt for heavy cream instead of the condensed milk.

It may not be a Sno ball, but in the end, it is every bit as refreshing, especially on a hot August day.

4 cups strong brewed coffee (sorry–no chicory here–but I do like Peet’s)
agave syrup, to taste
pinch of cinnamon
heavy cream–extra fat if you can find it

1. Mix the brewed coffee with agave and cinnamon, to taste.
2. Chill  the coffee in the refrigerator until cold, then pour into a square metal pan and freeze until solid.
3. Remove pan from freezer and let sit at room temperature for 10 minutes, or until you can easily break up the mixture with the tines of a fork.
4. Break up the mixture until it’s good an slushy.
5. Spoon into glasses and immediately drizzle with the heavy cream.