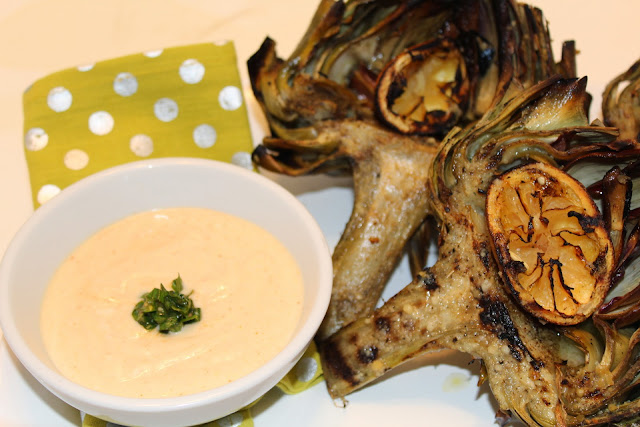 In the realm of ‘can’t get enough of a good thing,” artichokes top my list. Thankfully, Mr. B and I live so close to artichoke country that these thistled delicacies are never in short supply.

I’ve written about artichokes before and shared my recipe for a family favorite–New Orleans Stuffed Artichokes–but, truth be told, artichokes need little more than seasoning and a dipping sauce to make them a welcome addition to any meal.

But, before I divulge the secret to my spicy honey mustard dipping sauce, I’m serving up a little artichoke trivia to brighten the day. First off, the artichoke is truly a Mediterranean culinary contribution. First discovered in Sicily, the ancient Romans candied the hearts with honey and cumin seed.

The person who first ventured to try eating an artichoke likely had a steep learning curve. It must have been hell to figure out what was edible among the sharp, prickly leaves and fuzzy chokes, especially since the early artichoke eaters were likely going to the task with raw artichokes.

Anyhow, discover a better way to them, they did, and the artichoke moved around Europe gaining popularity, eventually riding the seas to Louisiana with the French and then soon after, taken by the Spanish to California. Now, virtually every artichoke eaten in the United States originates from Monterrey County, which just so happens to be 90 minutes up the road.

History and sex aside, let’s discuss one of our favorite ways to dine upon these delicacies: grilled with plenty of garlic, olive oil and lemon and charred over a hot grill. Mr. B adds a few wood chips to the mix while I whip a simple, yet tasty hot honey mustard sauce that goes equally as well with a pile of fried shrimp.

1. Whisk the honey and lemon into the mayo until smooth.
2. Add the Crystal’s and Dijon and whisk to incorporate.
3. Add the cayenne pepper and salt to taste.

*Dare to be bold–add more cayenne!